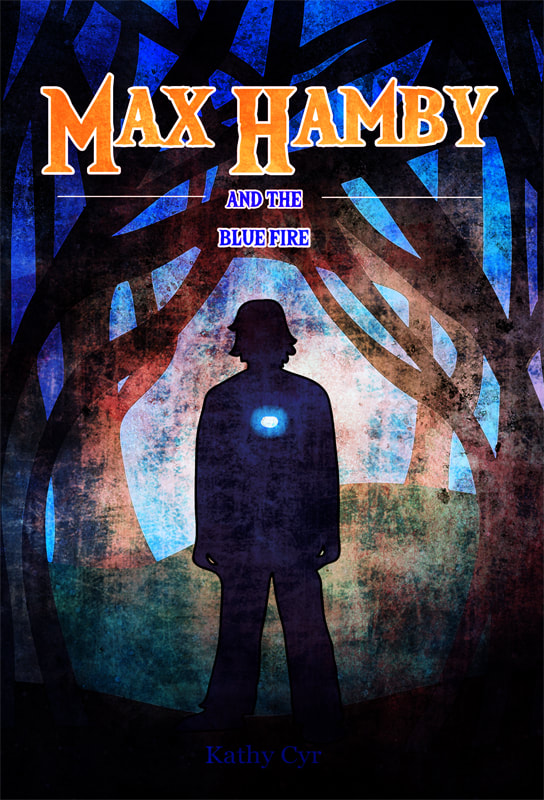 Max Hamby and the Blue Fire

Alfie and Cynric coughed their way out of their workshop in a cloud of smoke.
"I don't see how you could've mistaken a white-backed Odeck egg with one from a Boobrie," coughed Alfie. "Has it slipped your mind how many times that blasted bird tried to kill us?"
"I remember, brother," coughed Cynric.
"I think not. If it weren't for me, you'd be dead right now or don't you remember how the Odeck had you pinned down in its nest?" asked Alfie.
Cynric turned his head and put his finger to his lips. "Listen."
"I don't hear anything, besides the infernal pounding in my head from the smoke." Alfie sighed and dropped his hands to his sides. "Some days, I miss Pleasant Seas and our garden. It was..."
Cynric reached out, grabbed his brother's lips and held them closed. "Someone or something is moaning. If the Lumprotter is creating more rot, Griselda will have our heads." He let go of Alfie's lips and hurried downhill. Alfie opened his mouth, prepared to lecture his brother on the value of personal space, but Cynric was already halfway to the Lumprotter. The lecture would have to wait. He raced to catch up to his brother.

Max unrolled the map and waited for everyone to catch up. By the time he and Basil had joined the rest of the group, they were several yards from the house. He motioned for them to remain quiet and charged ahead until they were far enough away from Merrihaven. He studied the map, as the rest of the group circled around him. The Three Streams were in the northwest; farther away from Merrihaven than he expected. "Bonedread, we're going to need the disc," he said.
The goblin pushed his way into the center of the group and wagged the disc between his thumb and forefinger. "Have you ever been to the Three Streams before?" Max shook his head. The goblin turned around. "Has anyone been to the Three Streams or Gloomrock Lake? In order for the disc to work, someone needs a solid image of where we need to go. Otherwise it'll open to parts unknown."
"I have flown over it," said a voice at the back. A Cagon stepped out from behind Milo, the Spriggan and Basil. Its light yellow eyes focused on the goblin. The sun glinted off its pure white fur. It flexed the leathery wings folded against its muscled torso. "I remember it well."
Bonedread approached the winged wolf. "Then you must be the one to open the portal." He held the disc out, and then paused. He looked down one side of Cymry, then the other. "You'll need to throw it." He held it up to the Cagon's mouth. "May I?" The Cagon nodded. Bonedread slipped the disc between his teeth. "See the Three Streams in your mind, then throw the disc." Cymry blinked in response, then pulled his head back and whipped the flat, silver disc into the air. It flew end over end, then stopped with a slap. A soft glow appeared around the disc, followed by a rip. Bonedread approached the disc, but did not touch it. Instead, the goblin pierced the air just below it with a clawed finger.
Max watched the goblin slice down the middle of nothing. They had used the disc once before to escape the Black Order, but the portal had opened on its own then. Bonedread pulled it apart and stepped to the side.
No one paid any attention to the ragged porcelain doll approaching from behind. Its one good eye focused on the back of Max's legs. Its other eye hung from a questionable red string and swung from side to side in front of its cracked face. It ran behind the troll and goblin. It skittered through the grass, then skipped behind the half-giants. It paused when the Spriggan moved a little too close to the half-giant's leg.
The doll ran beneath the Cagon and nearly missed being squashed by the goblin’s feet. Luck was on its side when Max put the satchel on the ground. It scurried over, opened the flap and slipped inside a second before the satchel was picked up again. It settled down on the opposite side of the hourglass and watch. Light appeared and the doll backed up. The map plunked down on its head, then it was dark again.
Zeeback was the first to step through the portal, followed by Basil and Merna. Milo and the Spriggan hopped through together with the twins. Max hung back with Bonedread, the half-giants and the Cagons. Bertha and Wunder hesitated and stared at the portal with trepidation.
"It's safe for biggins' like the two of you," said Bonedread.
Max glanced up at Bertha. She frowned at the portal. When her large brown eyes fell on him, he nodded. The half-giants were used to the Ostiums; closet doors that connect one place to another. He grasped her pinky finger, gave it a squeeze, then glanced over his shoulder. Wunder followed close behind his mother. Though most of his long blonde hair covered his face, the lower half was visible. His jaw tightened and the muscles in his arms flexed as they crossed to the other side. Max shivered as a slight tingle rushed over him. It disappeared once both his feet were in the new land. He let go of Bertha's finger and turned to watch the Cagon come through, then Bonedread. The goblin grimaced and one eye twitched. It could've been the effects of the portal, but it was gone too quickly. He eyed the goblin for a second more before turning to study their new surroundings. It reminded him of Merrihaven with its lush green grass and tall, full trees. There was something more, though. A heaviness settled over him and a constant trickling sound played in his ears. He glanced at the others to see if they could hear it, too.
The Spriggan nodded. "Water."
"I hear it," said Milo.
"But, where? I don't see any water," said Snoop.
"Herrick and I will search from above," said Cymry. The Cagons got a running start, flapped their wings and lifted off.
"What do we do now?" asked Snoop.
Max searched the skies for the Cagons, but they were already gone. "We wait."

▪ ▪ ▪
Alfie and Cynric rounded Knoxby's shack and stopped in their tracks. The Lumprotter had fallen off his rotted stump and was laying on the ground, moaning.
A brown mouse chittered and squeaked as it ran back and forth at the edge of the rot. It caught sight of the Pinkstone brothers, squeaked and ran towards them. It hopped onto the toe of Cynric's boot. Its arms flailed. He bent down and held out his hand. The mouse jumped into it excitedly. "Well, I'll be. A Gibbering Mouse." He watched the mouse with fascination. "We've only heard stories about these little guys. Haven't we, Alfie?"
Alfie didn't respond.
When the mouse realized it was being ignored, it stomped its foot. When that didn't work, it bit his finger. "Ow," cried Cynric. "What was that for?" The gibbering mouse rolled its eyes, then pointed at the Lumprotter.
"It's trying to tell you that we have a serious problem, brother."